This is a Bad situation for all exposed to the Rad. Now included, for the 7th Week of 2018 just passed, all cities above 7,000,000 CPM Year to Date of deadly Gamma Radiation and its unpublished radioactive kin. A Count is One Radioactive Decay.

Gamma and Beta CPM by City and State in the US

See the original article for access to the sortable Table of Poisoned American Cities in the Bob Nichols Veterans Today column. 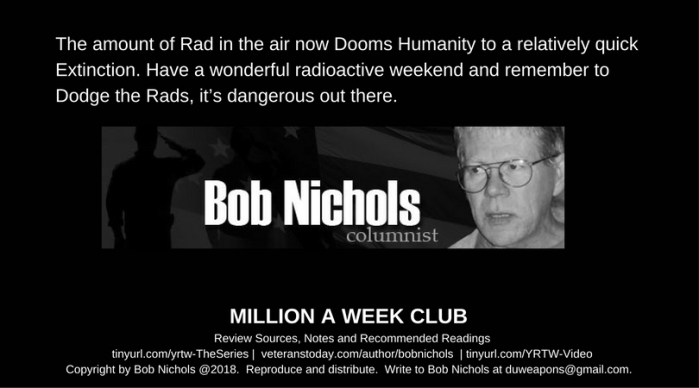 SEE MORE CHARTS, MAPS AND GRAPHS ON THE VIDEO CHANNEL – Your Radiation This Week – MILLION A WEEK CLUB

We Are The Media Now — Shared per copyright permissions as a public service message.  Thank you, Bob Nichols and Million A Week Club – Your Rad This Week in the US!

“Be prepared for a shock, these annual totals are really big radiation numbers. The numbers are your annual exposure to the Rad. How much you already absorbed is really hard to find out. The Nuke Labs know how to do it, of course; but they aren’t telling unclassified residents.”

Total Gamma Radiation YRTW No 29 and 30

Copyright by Bob Nichols @ 2017: Reproduce and distribute. Give full attribution to Bob Nichols at DUweapons@gmail.com

You are encouraged to write Nichols at duweapons@gmail.com

See the entire series at Your Radiation This Week.org and on the Bob Nichols column at Veterans Today

WE ARE THE MEDIA NOW – SO BE IT